What is Kunlun Mountain?

It is a mode similar to the Xtreme mode found in Dynasty Warriors: Xtreme Legends 4 and 5. You are given a set objective and a small time limit to complete it. Once you complete a stage you move on to the next one until you either fail a stage or quit voluntarily. Failing to complete a stage will force you to forfeit any weapons, gears, and items you acquired along the way, though some items may be given albeit at a lower quality (Fabric and Legendary Beast drops). There is a complete total of 9999 stages that you can do, just like Xtreme mode. You can also "pause" your progress and exit out of Kunlun Mountain to continue at another time. Your goal is to see how far you can go before deciding that you cannot continue any longer and want to collect your rewards. The amount of honor you gain is Number of stages complete times 4.

How do I join?

While in the Peach Garden you have to talk to the Kunlun Nymph. You can start over from the beginning or continue from where you last saved, if you have a Noble Visa you can start at a higher point that you reached, max Stage 100. You can party with anyone in the Peach Garden, so you can do Kunlun Mountain with players from other factions as well. In order to continue through a save/pause point, the rest of the members of your party must have paused at the same stage as well. If one member of the party is at a lower level they will be unable to join. If a Noble Visa is used you will start at the highest level the lowest of your party has reached. 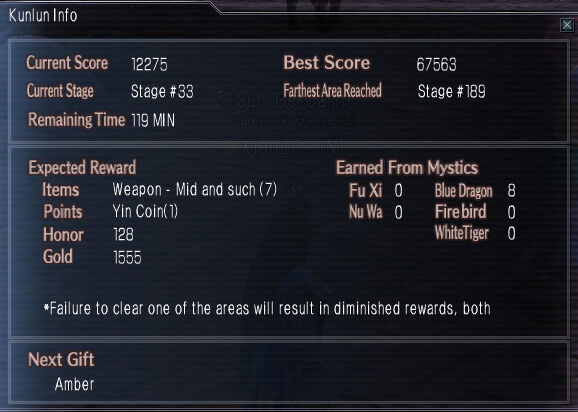 On this screen you can view your current and best progress of your Kunlun climbs. It also shows what rewards you can expect to get when you descend and what the next gift the Kunlun Nymph may give you after you complete stages as you climb. 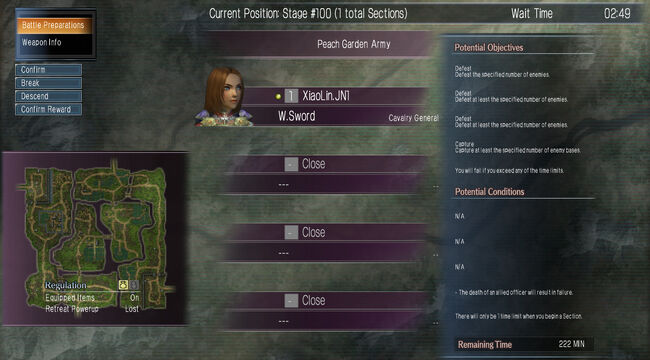 During the briefing screen you will see the potential objectives on the right hand side of the screen as well as potential conditions. Objectives are self explanatory. Conditions are restrictions placed on you to make things more difficult. Each stage in Kunlun mountain is made up of 3 areas that consist of these objectives and conditions. Each area has a time limit of 5 minutes. Once you complete an area, the time limit will reset to 5 minutes and you will be teleported to a different part of the map. Failing to complete a stage will result in you returning to the Peach Garden and losing all rewards you have earned. However, for every stage that is a multiple of 4, the time limit for the stage will be 15 minutes and you only have one area to do. Also the objectives will be more difficult than normal stages.

On the briefing screen there are 2 things you can do to stop playing Kunlun Mountain:

Other things to note while in Kunlun Mountain:

During each stage there are peach talismans that are stashed away in pots (not wooden boxes) throughout the map. Picking up a talisman will increase the universal time limit you have. A stage can contain a maximum of 3 talismans. Pots and wooden boxes are always in the same locations in Kunlun Mountain. Their locations never change. Below is a screenshot of each map and where the pots are located. The pink dots are pots. (These screenshots are from the Japanese wiki) 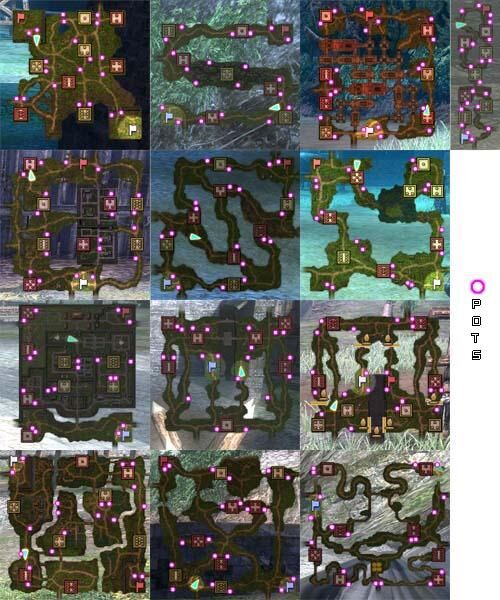 Every 20th stage there is a chance that Fu Xi or Nu Wa will give you an objective to complete. They are more likely to appear when there are less conditions to hinder you (N/A) or when the condition is the death of an allied officer will result in failure.

Also unlike normal stages your flasks upgrades are kept should you have failed and you will be given another chance, however if you fail three times in a row it will be the same as if you failed a normal stage. If your objective was

Finishing an objective for Fu Xi will give his fabric and vice versa for Nu Wa. The one that gave you the quest is the fabric you will get. 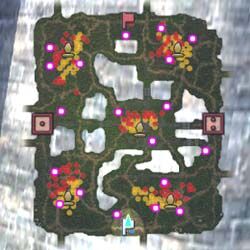 Completing the task given to you in the stage will briefly stun and weaken the beast you are fighting. Possible tasks you will be given are

The hardest part on some of these tasks is you may have to run to more than one area to get the amount that you need to weaken the beast. It takes time to complete some of these missions. However, if you ignore such tasks...the beast will eventually be further powered up and you may end up not being able to even get close to it due to dying from its ranged attacks.

The actual conditions may vary. You may or may not know if whether you will be able to fight the beast or not. Sometimes, the beast appears right in the front of the starting point (ally supply base) and you can fight it immediately. Other times, you will have to wait for 2 minutes before the game gives signal on the whereabouts of the beast. There is a 50% change when you approach to the assigned location, the beast just all of a sudden disappear from the map and you end up unable to fight the beast. In this case, the task will suddenly shift to get 2,000 K.O.s (even with 1 person). It is possibly the hardest mission to accomplish (mainly if done solo), especially if you did not bring a weapon for defeating troops, however a secondary condition may be clued in on what else you could do to pass to the next stage, note that any Legendary Beasts stages passed without killing said beast will not add their drop to your collective loot. Basically, the Legendary Beast tasks are more designed toward multi-player. Solo is possible, but it can take a really long time to complete.

Although it is designed that you beat them either by

A. Overpowering them or
B. Weakening them should take around 16 minutes either way.

When you discover the beast, its position will be displayed on the map via a red dragon head.

The Japanese names of the beasts may sound familiar to those who are familiar with the Chinese constellations or have heard/seen them in other media.

The following are the points gained or lost during the climb:

Community content is available under CC-BY-SA unless otherwise noted.
Advertisement