Campaigns are faction vs faction wars that decide who takes over the city. If you have played the Empire expansions from the console games, the concept is similar to that. Unlike Showdowns, they are not 12v12, they are 4v4 melee battles. They are the most important part of Dynasty Warriors Online and will determine which faction is victorious in the end.

When do they happen?

Campaign dates are announced by the GM, there are usually 1 or 2 battles for each Faction depending on how many factions are in the scenario. They last until one factions troop pool is depleted.

How are the cities that are contested decided upon?

The force with more conflict points decides which faction starts off with more morale when the campaign begins. Starting troops is influenced by the battlefield distance from the capital of each faction. The farther away the battlefield is from your capital, the less troops your faction will start off with.

NPC factions that are in under campaign will call upon a faction or coalition to help them out. Whoever is helping them will fight as normal. If the attackers win then they will gain the territory, but if the defenders win the city leader will make an alliance with them and they gain that city. So NPC factions are still played against another faction with people in it.

How can I participate in a Campaign?

If your faction is involved in a campaign you can join by going to the Marshal and selecting the "Campaign" option. Do note you must be Lt. Major rank or higher to participate in a campaign. Please note that the Marshal you go to must be the one for whom the battle is for. If you are in a coalition, say Sun Jian and Yuan Shao, and you are in Sun Jian where the campaign is for Yuan Shao, then you must use the Peach Nymph to go over to Yuan Shao and you will then join campaign there. If you do it from Sun Jian you will simply be shown how the campaign is doing, but you cannot join from a faction that isn't directly involved in the campaign. 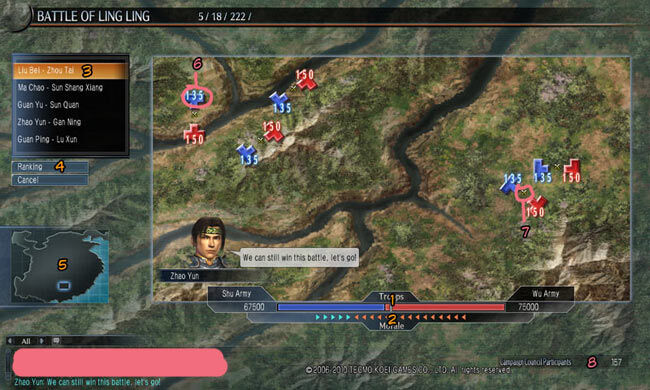 1. Troop Bar: Indicates the number of remaining troops on each side. As the campaign wages, the bar will turn red or blue depending on which side has more troops. When one side reaches 0 troops, they will be defeated and the campaign will end.

3. Battle List: Indicates the battles going on that you can join. This will tell you what two commanders are fighting and it will highlight which position they are in on the map. The two commanders that appear here are the ones that will show up in the battle you fight in. When generals lose all their troops they will be removed from this map, the generals that were fighting him/her will go to reinforce an allied general in the same force and team up. When you win a battle against generals who are teamed up, the troops lost will be split up among them.

4. Ranking List: This ranking list shows the position of each player's standings, as by wins, and consecutive wins in the current campaign. If a player, or party of players, get a certain amount of consecutive wins, they will be announced to every player on both factions to all players in town.

5. Battle Location: Shows where exactly in China the current campaign is being wagered.

6. Troop Count: Shows how many troops in hundreds that particular general has left. So in the screenshot above the general that is circled has 13,500 troops (135 x 100 = 13,500). When the troop count reaches zero, that general will withdraw from battle.

7. Battle Intensity Indicator: Represents whether that particular general has a lot of battles currently taking place. There are 5 levels indicated by a clashing sword symbol.

8. Campaign Council Participants: How many players are currently participating in the campaign.

The ultimate objective of a campaign is to deplete the troops of the opposing faction. Campaigns run until one side loses. When the campaign ends the winning faction will take over the city if one was fought for, and the in game timeline will be updated to reflect the campaign result.

Campaigns are pretty much Melee Battles. However there are couple of things that are preset about them:

1. Generals will ALWAYS enter the battle, the general in the battle are the commanders that are currently clashing in that area. If you defeat a general during battle you will gain their General Spirit. You can use their spirit in battle to transform into that particular general. However, it will overwrite your advanced skill.

2. The map in which you fight on will be randomly decided. Chosen from the list of maps that are normally available for that battlefield in normal melee.

3. Difficulty for the battle is set to Musou mode. So there is no restriction on who can enter what battles. You can be Lt. Major matched up against Generals.

4. Generals will NOT have their full rank displayed. Ex: A Field General would only be shown as General in preparation screen. A counselor general will look the same as a field general. (This rules applies to elite melee matches as well.)

The winning condition of campaign matches are randomly decided from the following set:

If you notice, there is no defeat 10 enemy commanders mode or treasure hunting mode. The winning condition will be displayed in the preparation screen so you will have time to prepare. Secondary condition is troop KO for all modes.

What kind of weapon should I bring into a Campaign?

A weapon that is versatile for defeat, base capture, and general killing. As you cannot decide which kind of match you will fight in. You can also have multiple weapons catered for each specific mode. You will be able to see what kind of mode you are fighting in the preparation screen.

What happens if a faction loses all their cities?

When a faction loses all of their cities they will inherent the domestic stats of the faction that wiped out their last city and they will become a sub-faction. During the next campaign the faction will have a chance to rise up and reconquer their capital city and they will start with an overwhelming advantage in the number of troops during that campaign.

What determines the starting troops and morale for each force?

Starting troops have to do with the distance of the battlefield from the capital city of each force. For every city (except NPC cities) away from the capital that the campaign takes place at, the troop count is decreased by 7,500 troops starting from 90,000. If you fight from the capital, your force will start with 90,000 troops. Starting morale is influenced by the conflict points for the particular battlefield that are earned through regular melee.

What determines the amount of troops you take off after every successful victory in a campaign?

It is believed that force morale plays a huge part as does the number of total consecutive wins of the winning team. It is most likely a combination of the two and possibly rank/honor/fame. The exact formula is unknown. As consecutive wins and force morale are generally intertwined. However, the longer the campaign goes on, the more damage will be done after each battle.

What happens if a faction has less than 5 generals? Who participates in campaign?

Generic officers will take up the missing spots in campaign. Such as Jian Yong, Yan Liang, Hua Xiong, Ma Liang, Cheng Pu, etc. If you join a battle involving a generic officer the "Defeat the Enemy Leader" battle will never be chosen. It will be just like a regular melee battle. No generals will join the battle, even if the opposite side contains a musou general.

Some people will wonder how to calculate starting troop count. Here are 3 examples of campaign situations 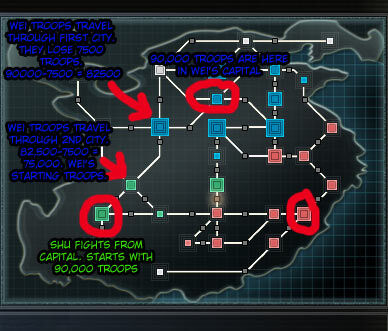 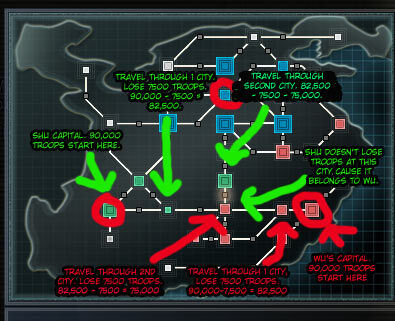 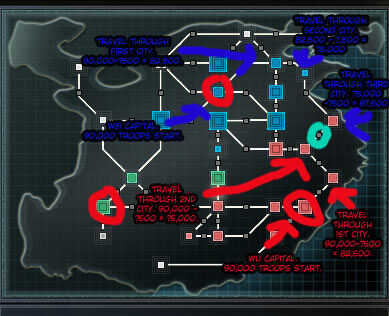 Each example shows the distance traveled which determines how many troops stay back for each city till the eventual battleground.

What are Final Campaigns?

Final Campaigns are the battles to decide which faction is the unifier of the scenario so a new one can start. These battles are all on fair ground giving both sides 90,000 troops and even morale. Battles are based on number of factions and number of territories held. For example with 3 factions the one with the most lands will not have to battle till the other 2 have a victor between them. In case of 4 the factions with the most cities fight each other and the ones with the least fight each other, the winners of those matches fight to determine the unifier. With 5 the factions with the most land only has to battle once the other 4 decide who will battle them which goes in tournament style of 2 highest against each other and 2 lowest against each other, then the 2 winners then the victor between them versus the one with the most land. When the land is unified under one faction you will get to view your ending with your general and get transported to Limbo Town.

Short form examples
3 factions
Wei has the most territories, Wu has the second most, Shu has the least

Winner on day 2 is the unifier

Winner on day 2 is the unifier

Winner on day 3 is the unifier

Community content is available under CC-BY-SA unless otherwise noted.
Advertisement